Ideas for Communication during Autism Meltdowns

One of the most difficult aspects of Autism is the meltdowns.  Especially if they are in public places!  The looks from people and the muttering under their breath never seems to help neither the situation nor your confidence.

Last Sunday I was at church with my son and he was beginning to go into meltdown mode.  He could not tell me what was wrong and just wanted to draw on the chalkboard.  I was so frustrated because he would not communicate to me what he was feeling or what had happened.  So I finally gave up and let him go to the chalkboard and draw.  Boy was I surprised what came from the drawing!

Drawing a Picture of the Situation

My son began to draw on the chalkboard a picture of what had happened.  While he was drawing, he was describing to me his emotions and the emotions of others around him.  He was also explaining to me the situation and what happened to make him upset.

I was shocked that he had thought of this idea to help him cope with and explain things.  When he was done, he looked at me and said, “That was better mom.  Now I feel better.”  This is something that we will be using in the future to help him explain situations and his feelings involved.

Writing out the Situation

Once kids are older, they may want to write out what happened- especially if they are gifted at writing.  A sixth grader I work with tried this the last two times he got upset at school. 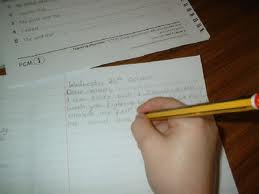 While he was writing the situation out on the computer, he was able to go back and add details and take out things as he saw fit.  Because he tends to talk quickly and think faster than he talk, this gave him the opportunity to explain the whole story without forgetting things, and he was able to take his time thinking about the situation and how he was feeling in each moment.  Once completed, he was able to share the document with the different people he needed to explain things to, which eliminated the frustration of verbally sharing the story five times over.

Now, these ideas do not take away the importance of having them verbally process the situation.  We still do that, but it allows them to process in the way they are gifted at processing things without getting more upset.  Appropriate consequences are still given, but the child is allowed to explain things his/her own way.

I also wait until the child has calmed down enough to do the picture or writing.  For example, I cuddled with my son for ten minutes and my student rocked in the rocking chair and spent time alone with quiet music and a book in a calm room before processing the situation.

Will this work every time?  Possibly not.  Part of the trick is teaching them how to do this before an incident happens.  My son’s therapist has been having him draw something about his week each session and my student has been writing about things that have happened in the past.  So they had been essentially practicing for this situation and felt comfortable doing it.  The fine motor skills activity was also helpful in helping them calm down and reduce the anxiety level.

Certainly there are many other ideas and thoughts for processing after a meltdown.  And of course this can work for kids that are not on the spectrum as well.  Share with me your thoughts and things that work for your children!  Practice these skills with your kids so they can implement them to help them process!